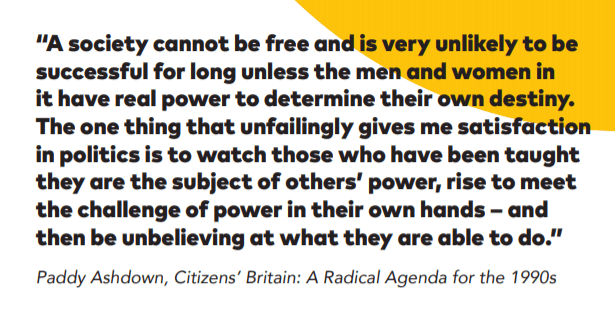 At the end of last year, Jon Alexander and Dr Ian Kearns put out a fascinating report entitled Citizens’ Britain: A radical agenda for the 2020s. I read it immediately, and thought it was brilliant – a truly radical idea for British politics. Jon and I recently caught up, and I had some questions for him…

David: First of all, congratulations on the report. I think it is brilliant – at long last something radical! Could you start by setting out the key ideas?

Jon: Thanks David, means a lot coming from you! At the core of the report, really, is a distinction between what we see as three fundamentally different approaches to politics, each rooted in a different idea of the individual in society.

The first is the Subject approach, where the role of the individual is to keep your head down as do as you are told by the government of the day, on the basis they know what’s best. The Economist ran a cover story in late November talking about this Conservative Party interpreting democracy as meaning that what the executive decides IS the will of the people; that’s a very Subject politics attitude. Jacob Rees-Mogg is a pretty good embodiment.

Then there’s the Consumer approach, where the role of the individual is to pursue your own self interest, on the basis that this will add up to the collective interest; and where the agency of the individual is all about choosing between options. This is in the current government too – think of “Eat Out To Help Out” – and is arguably the frame in which politics has existed since at least Margaret Thatcher.

The report is all built around this conceptual model, which originally comes from my work at the company I founded in 2014, the New Citizenship Project. Ian and I have applied this to British politics.

We look at these through the lens of the liberal tradition, identifying the citizen as a fundamentally liberal idea; then look at case studies of where this kind of “citizen politics” – as we call it – is emerging; then we share some polling data that suggests this approach could be VERY popular, if only a political party were to properly inhabit and adopt it…

David: I suppose that brings me to my key challenge for you. If this is so important, why is it that mainstream politics doesn’t seem to see it that way – or really to see it at all?

Jon: So I was reading Thomas Kuhn’s famous book The Structure of Scientific Revolutions the other day – which is really as much about politics as about science – and I think his analysis helps answer this. He argues that political “revolutions” happen when the institutional structures stop performing their function, and happen in three broad phases.

For a while, there is a kind of quiet crisis, with people disengaging from those structures, not everyone even notices things are fundamentally broken. That I would argue is where we were after 2008, reflating the old structures and not really noticing that lots of people were tuning out and deciding politics couldn’t fix things for them.

Then the next phase is that one group starts to articulate a new kind of institutional framework in what is in Kuhn’s terms a “revolutionary” project. That I think is what the Conservative Party have gotten to first. They have a revolutionary project, an idea of what they want to create or at least what they want to clear out of their way.

That left the rest of us stuck defending the old framework, even though we don’t really believe in it any more either, but we see the damage of the collapse so we try to hold it back. That was obviously the story of 2016, but I think it is still where mainstream politics is even now.

What I think we’re talking about with Citizens’ Britain is accepting the challenge of coming up with a better revolutionary project than the Conservatives, which maybe mainstream progressive politics isn’t quite yet ready to see.

But I would argue we need to get to it fast, because what needs to happen next is that there’s a proper battle for the future. What Kuhn says is that when the institutional framework has really outlived its time, any revolutionary project will be more attractive than the status quo. Just defending it is doomed to fail.

We need to get into that next, third phase: the battle for the future, not just the defence of the past.

David: That’s very interesting. It makes me think of the late 1970s, when Callaghan’s government was running out of ideas and stuck defending an approach that wasn’t really working. That of course was when Thatcher was on the rise, and the far right was right there too, not far behind her…

Jon: That’s really interesting. I think this current Conservative crop identify strongly with that moment as well. I recently read a review of Britannia Unchained, the book I mentioned before which was written by Kwasi Kwarteng, Dominic Raab, Liz Truss and Priti Patel, from when it was published in 2012.

They were pretty focused on the analogy with that time themselves by the sound of things: they talked about Cameron as being like Edward Heath: narrowly elected in 1970, briefly tough before a chaos of U-turns, replaced in 1974 by an often equally beleaguered Labour administration – before the right’s big moment finally arrived in 1979, with Thatcher’s election. They see themselves as Thatcher’s second coming.

David: That is a deeply frightening thought. Does the thinking you’re working with trace its ancestry by comparison? Or is it completely new?

Jon: A bit of both really. There’s some very explicit ancestry, in that the title, the subtitle and even the front cover design of the report are directly inspired by Paddy Ashdown. He published his Citizens’ Britain in 1989, and it really is an astonishing read even now.

He talks about a choice between Citadel Britain, a nation which retreats behind the English channel, becomes hyper-centralised and highly corrupt; and a Citizens’ Britain, which is open and participatory, and runs on distributed power. It’s really very prescient: he talks about everything from Universal Basic Income to universal shareholding as ways to distribute power, and puts the environment right at the heart of the agenda as well…

There’s more liberal ancestry beyond Paddy too though, and that’s why I’m part of the Social Liberal Forum. In a lot of ways, I think of this agenda as the 21st century incarnation of the “community politics” movement of the 70s and 80s, in which Gordon Lishman, now a stalwart of the SLF, was such a key figure.

David: I can see that link, certainly. You said a bit of both, though, old and new?

Jon: Yes. The new bit is really the fact so many methods and technologies have emerged to support this way of thinking and working now.

We profile three of the best case studies in the report: Taiwan, which I would argue is the best place in the world to look if you want a vision of the future of liberal democracy right now; Ireland, which has one of the best examples of a Citizens’ Assembly and deliberative democracy; and Iceland, where some really fascinating local-level digital democracy has made a massive difference to their politics since the financial crash.

David: So overall, are you an optimist or a pessimist?

Jon: I’m going to be awkward again and say I don’t really like that distinction either! I’m a big fan of Rebecca Solnit, and in her book Hope In The Dark she says some very powerful things about hope. She says optimists think it’ll all be ok no matter what we do, and pessimists think the opposite, but that in doing so, both excuse themselves from getting stuck in.

By contrast, she defines “authentic hope” as a combination of clarity and imagination, seeing the troubles of the world for what they are but having the imagination to see that things could be different, if and only if we get stuck in.

Jon Alexander is co-founder of the New Citizenship Project (www.newcitizenship.org.uk), a pioneering UK-based strategy and innovation company on a mission to support the shift in the dominant story of the individual in society from consumer to citizen. He is also a council member of the Social Liberal Forum, and author of a forthcoming book, The Citizen Revelation.