Churchill’s statue: the case against 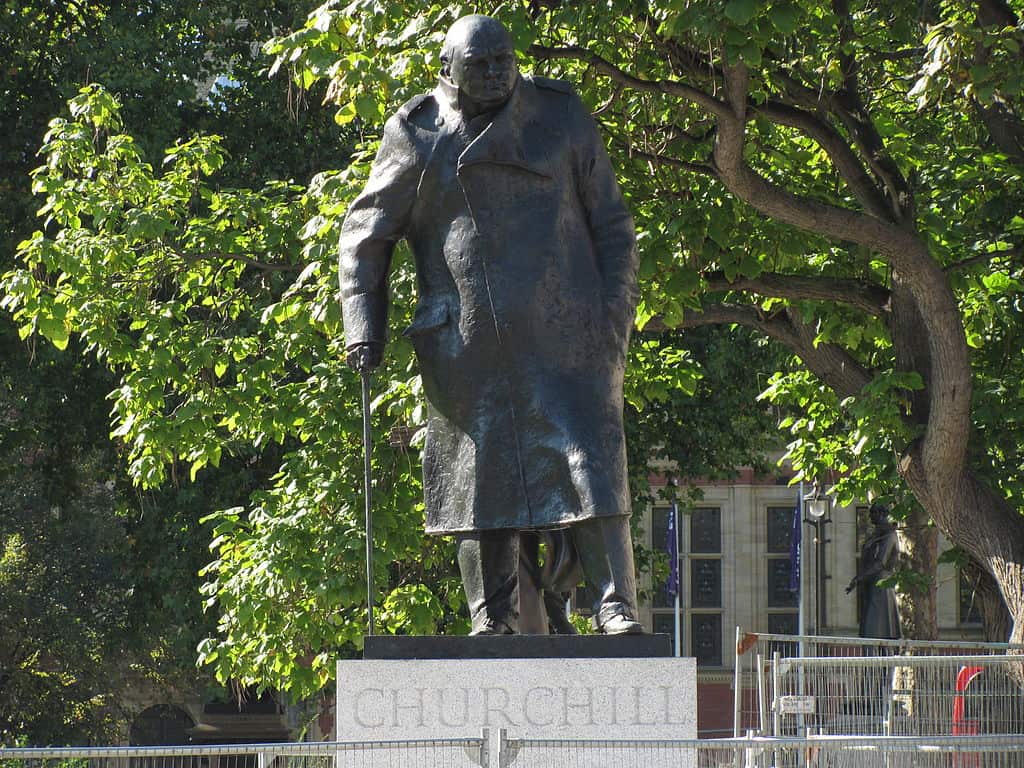 There is no British hero better loved than Winston Churchill. He is seen as the human representation of British values like honesty, perseverance, and courage.

Boris Johnson idolises him, so much so that he wrote an entire biography praising Churchill’s role in opposing Nazism. Churchill’s mark on popular culture is larger than almost any other Prime Minister, with many successful biographies, a recent popular film starring Gary Oldman, four episodes of Doctor Who, and one car insurance selling cartoon bulldog. Churchill’s 1940, ‘We shall fight them on the beaches’ speech, is perhaps the most widely recognisable piece of British political oratory.

It is no surprise, given Churchill’s role in British culture, that vandalism of his statues and measures to protect them have elicited such a strong response. Churchill has become a rallying point for the far-right, who this weekend, marched to ‘defend’ the Churchill statue in parliament square, while drinking, ‘sieg heiling’ and assaulting members of the public.

Part of the attraction of Churchill for the Nazi influenced far-right, is the oft repeated refrain that ‘without Churchill we’d all be speaking German’. Their nightmare scenario for a purported Nazi conquest of Britain is not the extension of the Nazi holocaust to Britain, or the loss of basic rights to protest and to free speech, it is that they might be forced to learn a foreign language.

Their objection to German Nazism is not primarily its racism, but its foreignness.  The cult of Churchill as a nationalist anti-Nazi hero can coexist happily with Nazism in its British variant.

Paul Gilroy, in his seminal book on British racism, Ain’t No Black in the Union Jack argues that Churchill, and the mythology surrounding him, represents British innocence, with the British as the heroic opponents of a monstrous Nazi oppression. When faced by European weakness, ‘we’ British fought the Nazis on our own. This assumption of British heroism makes conversations about race more difficult.

We need to tell other stories about British history, and there are other stories about Winston Churchill to match this. Neither Britain, nor Churchill are quite as innocent as the Churchill cult would like to suggest. The British did not fight Nazism alone but had a world-spanning empire. This empire was built and by maintained through force, and justified through white supremacy, the belief in the necessity of white rule.

This empire was sustained through a mixture of overt violence, and administrative callousness, caused by the belief that non-white people were not equal humans. Some of these acts of administrative callousness, such as the 1943 Bengal famine, were brought about by Churchill’s government, which continued to export rice from the region, and denied the Viceroy’s requests for emergency relief, despite massive food shortages.

Churchill’s justification was that Indians’ ‘bred like rabbits’, a revealing use of an animalistic metaphor, and therefore didn’t require the food aid.

Direct violence was also characteristic of the British Empire. Again, Churchill played an active part in this. Under Churchill’s orders, in Greece in 1944, the British rearmed right-wing militias, who had previously been allied with Nazis, and encouraged them to fire on a leftist rally. This triggered the Greek Civil War, which left as many as 200,000 dead.

During Churchill’s second term (1951-1955), he presided over the first years of the ‘Kenyan Emergency’, otherwise known as the Mau Mau revolt, which included the use of concentration camps by the British government. In Malayasia, again during Churchill’s second term, ‘detention camps’ were used to imprison over 400,000 ethnic Chinese. Closer to home, in Ireland, it was Churchill, as Secretary of State for War, who oversaw the first introduction of the paramilitary Black and Tans to Ireland, which even in 1921 were a ‘byword for brutality’.

Even the traditional story about Churchillian Britain standing alone against Nazism, may not be as true as it appears. It was after all, the same Britain which refused to allow Jewish refugees from Nazism, unless there was proof that these refugees would not be a burden on the state, a policy which has contemporary echoes that are far too obvious.

Similarly, immigration restrictions in the first three decades of the twentieth century were applied against Jewish victims of pogroms in Czarist Russian and Poland, condemning many to a life of extreme poverty and habitual violence.

Again, Churchill was not a passive observer to these events. Writing in a 1920 Daily Express column Churchill differentiates between the good ‘national’ Jewish bourgeoise, and the sinister and scheming ‘international Jew’ of Eastern Europe, making the implicit antisemitic argument that Jews were a threat to the British nation. Churchill’s opposition to Nazism, was not brought about by a deep concern for its victims, but a fear that Nazism was a threat to the British Empire. He would probably have approved of the argument that without him, we would all be speaking German.

Defenders of Churchill might claim that we should not try to judge people in the past, when Churchill’s politics were more normal, by morality of the present. This is to some extent true, although it would not be difficult to find a historical figure who was responsible for slightly fewer acts of ethnic cleansing.

The past was a complicated place, and some of the views that Churchill held would be the norm for someone of his class, gender and race. For many of these incidents, Churchill cannot be given sole responsibility, and his politics were largely continuous with his immediate predecessors and successors. Churchill’s lack of exceptionality raises its own questions.

How did Britain develop a class of leaders who were so comfortable with such extraordinary acts of brutality? What is the legacy of those leaders and what role does their politics have today? It would be deeply naïve to argue that Churchillian British racism, is entirely a problem of the past.

To understand these issues, we need a nuanced and critical understanding Britain’s colonial and racial history and the ways in which they effect our world today. To have this understanding we need to leave behind the story of Churchillian Britain, as an innocent defender of freedom against the monstrosities of Nazism, and to rethink the figure of Churchill himself.

Celebrating Churchill as a national saviour as our current memorial culture does, hinders these conversations.  Churchill’s statue in parliament square is currently covered by a grey box, for its own protection. To come to a fuller understanding of our past and present, it might be better if it stayed covered.

Joshua Alston is a post-graduate researcher at the University of Leeds. His research focuses on Jewish, South African and British Imperial history. His current project concentrates on Jewish experiences of whiteness in South Africa, from 1937-2000.