Can we go beyond Us and Them? 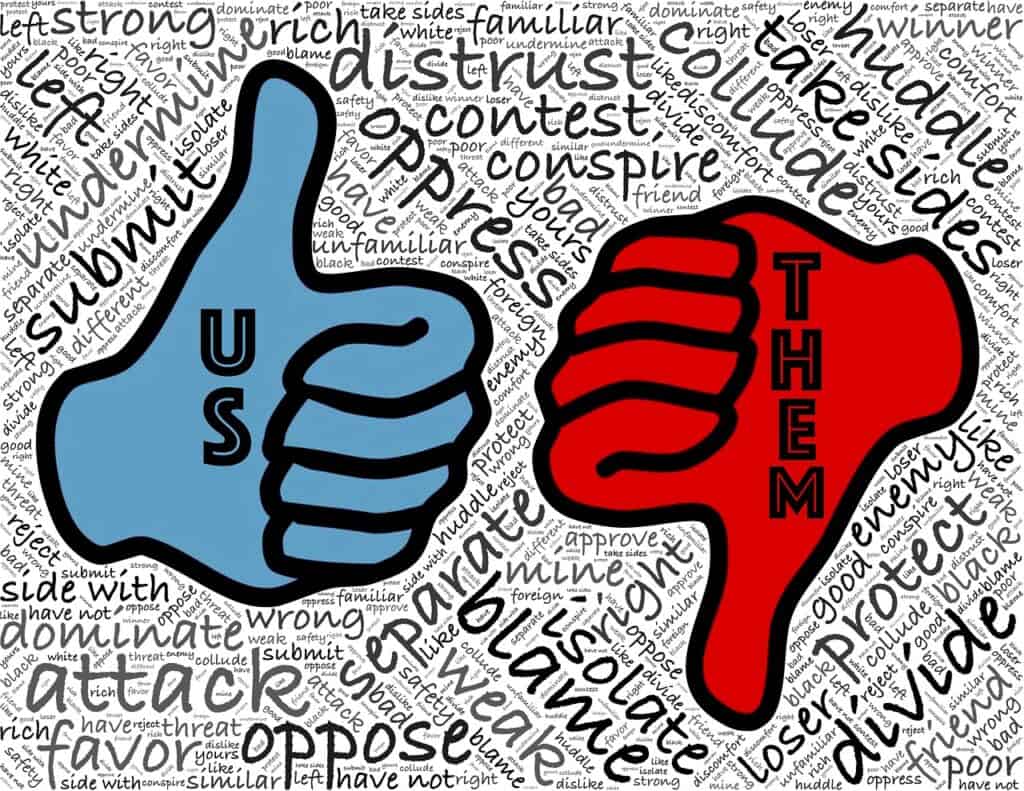 ‘Them’ and ‘us’ syndrome is well understood in the business world. Harm that mindset inflicts on companies prompted many studies to expose the dangers and prescribe countermeasures.

The idea has deeper roots in religion where dualism – good and evil, God and Satan, angels and devils – are hallowed concepts. The idea, hence, has a powerful grip on human beings’ view of life.

Often ‘them’ and ‘us’ goes on with minimal impact as is the case in sporting competitive alliances and regional diversity. The syndrome, however, has gone unchallenged, possibly even unadmitted, within the political economic arena. It is in this field that it has been abused with devastating results. Features that divide and single out have been utilised extensively, and quite openly, by states, political leaders, and agitators as battle cries to achieve aims, from evil to downright daft.

Due to its ease of application and effectiveness the process is popular. Over the ages people, individually or as groups and states, have defined themselves by their conception of how they see ‘others’. ‘They’ are uncivilised so ‘we’ are ‘civilised’. ‘They’ are cruel so ‘we’ are kind. ‘We’ are advanced, and they are ‘backward’.

It is astonishing not only how entrenched such views are but also how long they persist in historic terms. When they are put into action with malevolent intent, they could be most effective and destructive. Colonialism, wars, holocausts, slavery, racism, and other evils have been justified, often openly, on such flimsy and arbitrary assertions.

Invented labels and modes of behaviour are assigned to ‘enemies’ and ‘friends’ to generate condemnation or comradeship for all kinds of purposes. One such arbitrary label asserts ‘they’ do not have governments. They have regimes. The media pick up and run with the meme instantly. Since the end of the Second World War the world, at least the parts that are considered significant, has been divided into two blocks: east and west.

Rudyard Kipling’s assertion that “East is East, and West is West, and never the twain shall meet” was truly prophetic! Each side is heavily armed with conventional and not so conventional weapons in readiness for the final showdown. In the meantime, the rest of the world; Africa, the Middle East, are dragged into endless invasions and proxy wars. Both east and west lament and blame each other for the destruction and helpless refugees but the game goes on.

As mentioned above this pernicious dualism is not new. No example of the syndrome could be clearer than the murder of six million harmless Jewish people during the Nazi period in Germany. They were presumed to be different, so they had to go one way or the other. Once Nazis identified Jewish people as ‘them’ rather than ‘us’ the rest was obvious to the zealots.

Sadly, that example is not unique. One and a half million Armenians were killed between 1915 and 1923 at the time of the Ottoman Empire simply because they were ethnically and religiously different. My mother’s family were at the receiving end of that hideous project. She had to walk as a child from Mardin in Turkey to Mosul in Iraq to escape the slaughter.

She was one of the lucky ones!

Large scale killings of civilian populations continue to the present because they are ‘them’ and different from ‘us’. Rohingya genocide by the Burmese military is an ongoing atrocity that seems to come in waves. Other conflicts founded on ‘them’ and ‘us’ persist it seems without end. Interminable animosity between Israelis and Palestinians goes on with no end in sight. Kurds and Arabs and Shiites and Sunni Muslims in other parts of the Middle East continue the tradition with alacrity. ‘Divide and rule’ exercised by the world’s western and eastern leading powers is a reliable and openly used tactic.

There was a time in the past when colonialism was claimed to be a humanist action to protect and civilise ‘backward people’. At the other end of the scale and to bring the discussion to recent times, terror groups make up astonishing stories about their chosen opponents as an essential part of their efforts to recruit fighters and attract funding.

Some go further and invent visions of blissful afterlife for those who die while serving the cause. Judging by results there are many who believe even the most outlandish stories of fiction founded on the ‘them’ and ‘us’ ploy.

I was reminded recently of the effectiveness and longevity of the ‘us’ and ‘them’ practice when I read two books that friends had suggested I should revisit. Both were published some years ago and both had generated extensive discussion.

The first was published in 1978, reprinted several times since, and translated into many languages. Titled Orientalism and authored by the late Professor Edward Said, the book is a well-researched study of the way academics and politicians divided the world into ‘Orientals’ in the east and ‘Occidentals’ in the west and then proceeded to justify all forms of actions and prejudices based on the assumed contrasting ‘characteristics’ of the people who happened to live in the two blocks.

The second book was published in 1992 and authored by Professor Leila Ahmed with the title Women and Gender in Islam. Again, the book was based on a vast amount of research that covered not only what colonial powers said and did while they were in control of Egypt, but also activities of female activists from various social backgrounds and viewpoints who set out in their different ways to challenge colonialists’ assertions about Islam and Arabs.

In Orientalism, Professor Said offers the reader an astonishing collection of quotations that illustrate what leading politicians thought of “subject races” at the height of the British Empire. Lord Cromer, virtual ruler of Egypt from 1877 to 1907, features often in the book with lengthy quotations of his thoughts on Egyptians, and in passing on Indians and others.

Lord Cromer was held in awe by those in the British government in general and the Foreign Office in particular. His beliefs and prejudices became government policy for quite a while. However, they were tempered somewhat in later decades, but the general presumptions of ‘us’ and ‘them’ have not disappeared altogether.

It is important to state that similar concepts affected other nations and are not unique to Britain. French, Dutch, and Belgian practices as colonisers for instance were often more extreme than their British counterparts.

The book published by Professor Ahmed is of a later vintage but covers similar concepts – relating this time to the question of women and gender in Islam in particular. The importance of the book relates to its chosen subject. In highlighting the contrast between ‘them’ and ‘us’, the status of women has been highlighted as a distinguishing mark.

Use of the veil by some Muslim women was given special significance as evidence of repression and backwardness. Professor Ahmed challenged this stance and turned the discussion round to suggest that many women wear the veil as a mark of identity and nationalism. Lord Cromer, during his rule of Egypt, highlighted and lamented the position of women in Islam as he saw it. Interestingly he founded in Britain a Men’s League in 1908 in opposition to Women’s suffrage!

Islam’s professed attitude to women and girls continues to feature prominently in contrasting ‘Islamic restrictive’ practices with “Western liberal’ norms. This is seen clearly in Western reports on Afghanistan since the Taliban take over. The focus seems to be again on ‘them’ and ‘us’ with a presumption that the life of Afghanistan people was much better under foreign occupation. Help to Afghanistan to do better, however, is hardly ever on the agenda.

Recent unacceptable invasion of Ukraine by Russia provides another illustration of the syndrome. The invasion was cruel and unjustified but hardly any of those in the ’West’ decrying the war recalled similar Western invasions such as war on Iraq in 2003 in search of non-existent weapons of mass destruction.

Saudi Arabia and US military operations in Yemen also appear to have skipped commentators’ attention. According to the Council on Foreign Relations, 20.7 million Yemeni people are left in need of humanitarian assistance, 111,000 have been killed since 2015, and 4.2 million people are internally displaced. US President Biden decided to end US support for that war in February 2021, but the USA continues to sell weapons to Saudi Arabia.

It is difficult to escape the impression that people in Ukraine are perceived to be more significant as they are Europeans like ‘us’. Those in Yemen, Syria or Iraq are ‘them’ and concern is adjusted accordingly.

The point being made above goes to the heart of the ‘them’ and ‘us’ syndrome. Those affected by war are victims worthy of equal concern and sympathy whoever they might happen to be.

Religion is the difference of choice when it comes to application of the ‘them’ and ‘us’ syndrome. The Crusades, initiated by Pope Urban, were a series of wars, the most famous of which took place in the Holy Land between 1095 and 1291.

Dispute over Jerusalem featured large in that campaign. That dispute continues today: only the ‘them’ and ‘us’ have changed!