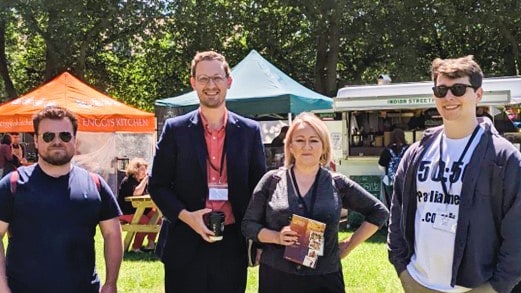 Big Tent held its annual political festival in Bristol on Saturday 11 June. As politics students from the University of The West of England, we were lucky enough to have been invited.

Bristol is a city with a rich and diverse political scene with MPs and councillors from all parties. Adding Radix to the equation has enabled Bristol to showcase itself to its fullest potential. Political figures from all parties, including George Freeman MP of the Conservatives, Stephen Kinnock MP of the Labour Party, and Layla Moran MP of the Liberal Democrats, prove that Radix’s cross-party conversation in areas such as this continues to be a success.

The Radix Big Tent festival gave me an insight into other policy areas, such as marine conservation, The housing crisis, rural and seaside regeneration, and public transport issues, among other topics.

A single person solves no issue. We do not realize how many policy areas impact us all. The conversations between myself and the committee oF UWE PAIRS (see picture above) with influential figures such as Kerry McCarthy MP and director of Unlock Democracy, Tom Brake, make us realise how issues can be shared and worked on together.

Radix aims to bring people together from different sections of the political spectrum to contribute to significant topical conversations.

The festival started with a passionate speech by Stephen Kinnock MP, who linked Jo Cox’s theory that having more in common brings people together to Radix’s work. Next up was the current serving Labour mayor of Bristol, Marvin Rees. He eloquently explained how decisions aren’t just made in Westminster, Whitehall, or local government.

He told the listening public that they have a chance to shape the discussions and have their voices heard to shape tomorrow’s policy.

The first panel that I attended as a roving social media reporter for the day discussed ‘Transport for Net Zero’. Bristol Metro buses run on biogas and electrified trains, but the question was raised by the moderator from the Bristol Post, Tristan Cork, about whether transport can truly be net-zero.

Here, we got to hear George Freeman MP, one of the founders of the Big Tent Festival, speak about government policy on net-zero transport alongside former government minister Sir Vince Cable, Cllr Emma Edwards, and University of Bristol nanomaterials researcher Professor Valeska Ting.

Several major points were raised during this discussion, including the rise of rail and bus fares and the lack of electrical charging points for fully electric cars. It was unanimously agreed upon by panel members and the audience that the cost of living is contributing to people’s lack of travel.

Sir Vince discussed the lack of subsidised routes after an audience member said about the issues of American hedge funds, which have been attempting to take over local co-operatively owned transport providers such as Badgerline.

Points regarding e-scooters and e-bikes were raised. The University of The West of England is home to several e-bikes which are widely used among the student population. Bristol is also home to the voi e-scooter system, which Tristian mentioned he used to get to the festival site.

Vois and e-scooters are hugely popular in Bristol, and it was mentioned by three panellists that if, the systems were to be rolled out in other big cities, they would be a resounding success.

Fixing the housing crisis is something that the Labour-run Bristol City Council is determined to do in the city. Bristol is home to two universities with over 50,000 students each, and this puts pressure on local housing needs for the city.

Cllr Tom Renhard is the portfolio holder for housing in Bristol. The panel discussing this was moderated by the leaders of the Bristol Housing Festival, which aims to bring together people to celebrate successes and developments within the city of Bristol.

In Bristol, up to 30 per cent of properties are privately rented, and the rent is climbing an average of 52 per cent at the moment, which is more than people can afford, but many people are pushed into privately rented accommodation because there is an obvious lack of social housing in the city.

Cllr Enhard mentioned the recent approval of the city’s budget allows for a four-fold increase in the number of social houses planned for the city. Many landlords in Bristol buy properties and rent to students charging an average of £650+ a month, and this is more than it costs to live in halls of residence.

Building communities is an important thing to do in the current climate of crisis. Former Labour MP for Redcar and former Co-operative Party chair Anna Turley chaired this discussion. There were some interesting discussions, and one of the questions that were asked was ‘How do we level up seaside and rural communities like those we see in south west England?’

It was mentioned that these rural and seaside communities could create community hubs like the one in Knowle West, Bristol. Many of these communities are detached from each other and have many additional factors to consider, such as farming and agriculture.

A break was needed before moving on to the final panels of the day. First up was ‘How do we talk about Ukraine?’ Ukraine sees its worst crisis since becoming an independent state.

As Liberal Democrat foreign affairs spokesperson Layla Moran MP said, we should have done much more much quicker. The idea of a no-fly zone for Ukraine was floated, but it was also mentioned that we have gone beyond this now. The urge is for the UK government to provide more powerful ammunition and weapons, as well as armed forces training to the armed forces of Ukraine.

Moran mentioned the broken refugee visa system. She mentioned that she is hosting refugees, but the time it took her from start to finish was too long – and many are turning back to Ukraine because the system that the UK government put in place is too time-consuming.

Despite this, it has been noted that the integration of Ukrainian refugees into society has been quick, and Ukrainians are quick to adapt to their new lives in the UK. There is frustration from the UN about the discourse that Russia uses whist retaining its position as president of the UN security council.

It was noted by the UNHCR representative on the panel, Emma Chernivisky, that the language is demeaning towards Ukraine and that Russia needs to admit its wrongdoing before being able to move forward with an amicable solution for all parties involved.

In a country where there are more fast food outlets than any other type of food outlet, it begs the question of how we can fix the problem of food poverty and malnutrition.

Kemi Akinola, a Wandsworth councillor and food poverty campaigner, mentioned that there are many outlets in London that do a “£2 chicken and chips deal”. That is not uncommon, but it shows that with the rising cost of living, many people will be turning to cheaper and unhealthier alternatives to stay fed and hydrated.

Kerry McCarthy MP has been a vegan for more than 30 years and mentioned that veganism is sustainable as a diet, but admits that the diet is not for everyone. There needs to be a cheaper and healthier alternative for those who would like to try the vegan lifestyle.

Last up for us was a conversation with the chair of the Labour party, Annelise Doods MP. Dodds was questioned on a range of issues relating to the party, such as trans-rights, tuition fees as well sexism, and misogyny.

Many people don’t know that she is an author of a textbook on comparative policy, which is used in many public decision university modules.

She was able to tell the audience, with some measure of authority which policies would work for Labour and which ones would not…

Sadie Trent is a politics and international relations graduate, now studying LLM international law specialising in human rights and humanitarian law at UWE Bristol. Her research expertise is in international law and its application to states in Eastern Europe and Central Asia. She is also a keen advocate of cross-party discussions and decision making.

She came to the Big Tent Festival as a representative of PAIRS, the Political and International Relations Society of the University of the West of England, sponsors of the event.

Raising money for start-ups in the south west…

Radix in InterLib: Journal of the Liberal International British Group