Born digital: should we worry about those who are? 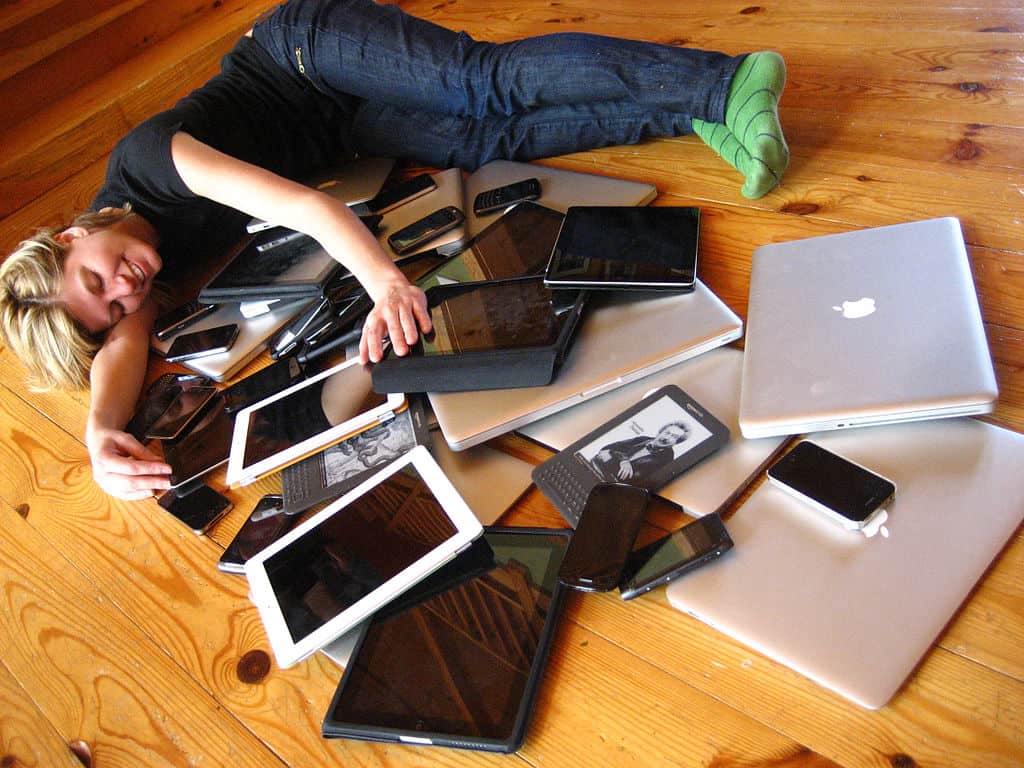 I can still hear my late mum, by then 93 years old, asking me often, “what would you do without your phone?” For me, it was always the signal to stop whatever I was doing and reconnect with mum again.

I may have been dealing with an “urgent” email, reading my Twitter feed, or looking at messages on one platform or another. Mum kind of “got” that my smart phone had become my diary, my inbox, my contacts book, my FT or weekly Economist and so on. She understood I could take and store photographs and films; that I could buy and immediately read a book online or keep up with the postings of friends around the world.

She struggled (as I do)  with the sheer range of apps and uses available on the device we still call our phone– even as unscheduled phone calls became a novelty. Nevertheless, my mum sensed better than I did how addicted many of us have become to our screens and the online platforms which we can access from our screens.

Information and communications technologies have transformed our lives over the last two decades, in many cases for the better. Did I make a conscious decision to give up carrying around a physical diary or even maintaining one? Or stop reading physical copies of newspapers? These technologies have gradually become more pervasive in our lives. What, however, about Generation Z which was born digital and often now seems umbilically linked to its screens, themselves displaying several platforms simultaneously? Has Gen Z grown up addicted to social media and always-on connectivity? Is this a problem?

Full disclosure: Bob has been a good friend of mine for 35 years and I was happy to read early drafts of his book and offer an idea or two. It is an important book. In many respects, Bob has joined up the dots and made the connections which all too few of us have made for ourselves. Frogs and boiling water spring to mind!

I for one freely confess that, before Bob’s book, I hadn’t really thought systematically about what these developments might mean – especially for the generation which has grown up knowing no other world than one with a “tsunami of devices.” Has it affected young people’s brains? We know much more nowadays about the plasticity of the brain as we grow up, so probably, yes. Bob argues it has affected Gen Z in fundamentally different ways to the impact on older consumers, including having had some profoundly negative impacts.

So, when the Radix team invited me to moderate a webinar about the themes of the book, it was a no-brainer.  Especially when they told me that as well as Bob we would have as fellow panellists, the co-chair of Facebook’s external Oversight Board – dubbed Facebook’s Supreme Court – and former Prime Minister of Denmark Helle Thorning-Schmidt and the founder of Radix’s Youth wing, Gen Z-er Piers Birmingham. You can watch our discussion on the Radix Facebook (sic) page from about ten minutes into the recording: https://www.facebook.com/Radixthinktank/videos/461551371731070

(Spot the digital migrants at the very beginning of the recording as we grapple with technology!)

As I watched the recording to refresh my memory to write this blog, I was struck by some important points of agreement. We agreed that realistically the responsibility for tackling on-line addiction must be shared. Parents need to be carefully checking and vetting what their children are viewing. Educators need to be teaching about how to spot fake news and how to protect yourselves online. Governments need to be more assertive about controlling how data is held and shared. Big Tech needs to be more proactive in taking more responsibility for the harms caused to some by their services.

I particularly liked the analogy that Helle made to the responsibilities of the global alcohol industry.  Broadly, society now accepts restrictions on the sale of alcohol to minors or to those obviously already intoxicated. We don’t tolerate drinking and driving – either legally or socially now. You are not allowed to control dangerous machinery whilst “under the influence” and many employers restrict drinking whilst working. In recent years, alcohol companies – with varying degrees of enthusiasm and skill – have come to accept that they have to share some responsibility for the misuse of their product and to become more active in drink aware and drink responsibly campaigns and initiatives.

So too, we need a shared responsibility for tackling the harms that are credibly associated with over-use and mis-use of online platforms. As Bob reminded us: not all screen-time is the same and some consumers are more vulnerable than others. Classic contract law rules about caveat emptor aren’t enough when it comes to being digital. Buyer beware assumes a level of buyer knowledge which many of us lack when it comes to consuming digital services.

As a corporate responsibility advocate, I was also personally intrigued by Bob’s emphasis on the responsibilities of Big Tech companies themselves – and in particular of ensuring their boards are fit to be stewards of such awesome power. Bob pointed out that whilst the average age of a Google employee is 29, the average age of the Google board is 62 with the youngest director being 47; and the only non-billionaire or multi-millionaire board member was a micro-biologist – not immediately obvious as the most relevant scientific background for the Skills Matrix of a Big Tech behemoth.

Certainly, judging by the thoughtfulness and self-confidence of our Radix webinar panellist, companies like Google would do well to consider innovations like a parallel, advisory Youth Board to assist the deliberations of their main board.

As Bob himself writes in Born Digital, he had ring-side seats as a corporate financier for the dot-com boom and bust; and as a bank chairman and member of the Court (Board) of the Bank of England during the Global Financial Crisis. He saw first-hand when boards and companies don’t fully understand or take responsibility for the consequence of their innovations.

Personally, I think he has done society a service in drawing attention to the dangers of too much screen-time and inappropriate screen usage – especially for those born digital. Certainly, he has raised issues for those of us in the radical centre of European politics to consider seriously.

This post will be the subject for debate tomorrow (Apr 23) on the LinkedIn Radix company page which can be found here https://www.linkedin.com/company/10790581. The blog will be posted around 10 am in the morning for discussion. Do join us!

Prof David Grayson CBE is Emeritus Professor of Corporate Responsibility at Cranfield School of Management and the chair of the board of the Institute of Business Ethics. David has established and run several public-private-community partnerships. He has advised companies, corporate responsibility coalitions and international institutions. He is the author of a number of books about purposeful business and corporate sustainability. David  is a fellow at the Radix Centre for Business, Politics & Society.