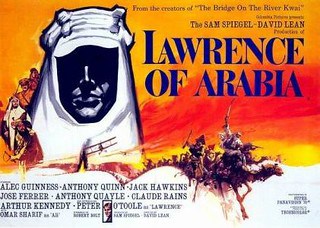 Sir David Lean has a lot to answer for. IMHO, he’s responsible for thousands of deaths and the protracted and  intractable nature of the Israeli-Palestinian conflict.

Which is pretty impressive, since he died in 1991.

Such is the nature of cinematic genius that his crime lives on in repeat broadcasts whenever there’s a lull in the sporting calendar. If you need reminding, one of Lean’s most lauded films is Lawrence of Arabia, which has almost the same running time as the Israeli-Palestinian conflict and about as many laughs.

Buried not-so-deep in the subtext of this ‘classic’ film is the trope of the Noble Savage; the infantilising, demeaning, offensive, eroticised view of Arab peoples as somehow excused from Western norms of behaviour. Within that absolution, as portrayed on screen, is the exhortation that it is the duty of Britain to defend actions which violate Western norms because, well… they just don’t know any better, do they?

A century of Arabist Foreign Office policy has cemented this fetish on the left and right of our politics.

And a fetish it is.

I’d bet that you read the title up top (scroll back up for it while I pour myself a drink) and thought ‘Ah, this is going to be about antisemitism.’ Well, you are half right. But I’m going to start with the ingrained set of assumptions that most of us would prefer not to acknowledge.

While David Lean gave us lush orchestration, desert sunsets, men in dresses and the colonialism that dare not speak its name, he also  portrayed  violence as the Arab’s natural state.  Maybe, just maybe, part of the solution is a recognition that this view is a teensy bit racist? OK, glaringly, horribly, overtly racist.

We’re caught between competing infantilising poles. The agitprop-JCR view of the Left portrays Palestinians as perpetual victims of the West (read: Israel) in a simplistic ahistorical narrative that ignores the multiple population transfers post WWII. This Left can’t bring itself to condemn the brutality of most of the regimes in the region without an easy and obvious Boogey Man (read: Colonialist, White). It’s none of our business, the Left says. If it’s brown on brown, put your placard down.

The Right can’t be accused of clinging to the ahistorical, but can be charged with the amoral. Arms sales to Saudi? Just business. Those public beheadings are just the way they do things there. Thousands of deaths of imported, indentured labourers with no legal rights? Who are we to judge?

Sykes-Picot long ago carved up the region along arbitrary lines and installed the strong men most likely to be loyal to the Great Powers to run things. That same loyalty,  stability and the control it bought was deemed more valuable during the British Mandate than the pesky Jews bleating about nasty old Hitler. Far safer to keep the Grand Mufti of Jerusalem on side than allow additions to the 5,000 year old indiginous Jewish population and risk an upset to the applecart. Just business. We in the Camel Corps don’t want to offend the Arabs. They take offense soooooooo easily. Desert people. Hot blooded, you know.

And that was your two paragraph tour of How The Middle East Got So Shit.

Exit through the gift shop and don’t forget to buy your souvenir keffiyeh.

And that wasn’t even the antisemitism bit.

In all this, both Left and Right treat the Palestinians with utter disrespect. In so doing, they pander to the forces that keep the conflict burning hot. Do we honestly believe that Gazans are unaware that they are hostages to Hamas? Do we think that when the residents of a Gaza City apartment block see the rocket launchers being set up in their courtyard, they are super psyched? Do we not credit them with knowing that there are two outcomes? Either, the rockets will misfire and kill them or the people in the next block. Or, if Israel detects the launcher and advises them to get out, Hamas will ensure that a photogenic family with kids is held back for slaughter. They know this.

Gaza is an open air prison. We just wilfully misidentify who the jailers are.

In the West Bank, do we really think the population hasn’t noticed that the election of 2009 didn’t happen? Or any elections after that? Do we think that they don’t see that there is a bit of a wealth gap between Abu Mazen, his cronies and everybody else? When West Bank Palestinians look across the border, they can see Israeli Arabs in the Knesset and sitting on the Supreme Court (Israelis. Good at tech. Bad at apartheid). They see women and LGBTQ people with equal protection under the law. Can we really think they’ve decided – Nah. All that economic and social advancement just isn’t for us. The Kleptocracy will do us just fine.

No. They don’t. They also don’t gleefully give up their children to become ‘martyrs’ who kill other peoples’ children. They don’t look at the arable farmland in Gaza left fallow since 2007 and think themselves lucky to subsist on whatever foreign aid doesn’t get looted before it reaches them. They are under no illusions that the people who purport to speak for them are corrupt and that they are being kept impoverished and deprived of democratic structures and good governance. They know that when they celebrated the moments when it looked like peace and progress was possible with compromise, their own leaders walked away.

Despite this, the Left and the Right maintain this patronising, paternalistic view that Palestinians aren’t like us. They talk about them like wayward, half civilised children and demand that Israel gives them sweets to make their tantrum stop. We expect them to be no better than their repressive, bombing, gassing neighbours. Our extremes excuse terrorism around the world done in their name as if they can’t use their words.

Our extremes throw up their hands in horror and claim that the Palestinians are blameless and are forced to fight a modern army with nothing but rocks (ROCKS!) while ignoring the missiles they fire and the tunnel infrastructure they’ve built to attack Israeli civilians. It’s asymmetric! It’s David v Goliath!

In this cycle of slaughter they demand ‘proportional’ responses from Israel – as if fairness demands that they shut off Iron Dome and allow mass Israeli casualties to even things up a bit. Because Israel has better toys and fair’s fair, chaps. Nothing changes if we talk to the Israelis as the only adults.

I promised I’d get to the antisemitism bit. And that was it. In this conflict, Israel is the unresolved daddy issue of the Left. To the Right, it’s the jumped up parvenu turning the sphere of influence pear shaped.

The language of the honest brokers in this conflict cannot come from those who have ingested this trope of Palestinians as noble savages for whom belligerence is a natural state. It will not come from those who do not recognise that Palestinians have the same aspirations that we do; to live in peace, to have a say in their governance, to work, to raise their families. Liberals believe in these values. Not perpetual victimhood but self agency. The work of peace requires that we see the conflict as a deficit of democracy for the Palestinians.  We need to be honest about which choices get them out of the cycle of corruption and repression.