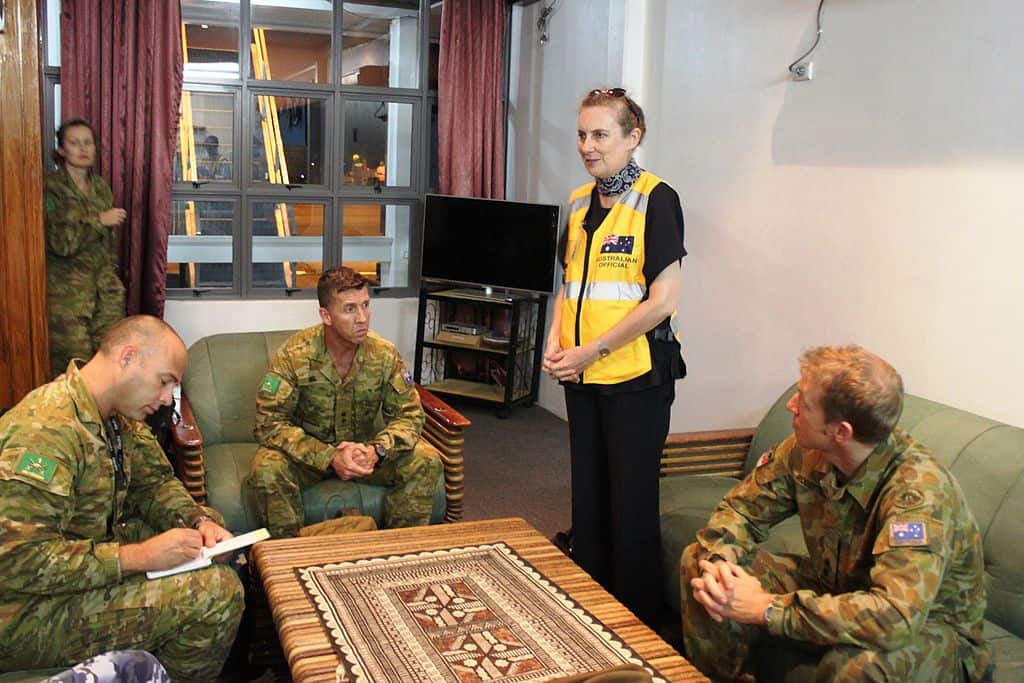 Ukraine and Australia share some things in common, despite being on opposite sides of the world. We are middle-sized nations, not big but not small, who value our independence and sovereignty in a world where big powers and their alliances constantly threaten insecurity and war.

Ukraine was once part of the Soviet bloc and has been pressured to become part of NATO. Australia was once part of the British Empire and then transferred allegiance to the US Empire. For both Australia and Ukraine, these alliances have brought war and trauma. We can do without them. But can we rise above the crises of the moment to see it?

In 1984, David Martin published Armed Neutrality for Australia. David was born in Hungary, was a stretcher-bearer in the Spanish Civil War, and lived most of this life in Beechworth, Victoria. He died in 1997, having written over 30 books of fiction and poetry. This was his sole work of non-fiction.

“This book aims to show that the best policy for Australia is armed neutrality. It accords with our needs and our geographical position. Shaped to our means, it would be viable both morally and in practice. If we can let go of the inherited belief that to be safe we need powerful protectors, we shall discover that we are quite able to look after ourselves. This would make us more enterprising and less self-enclosed, because independence promotes not truculence but growth”.

Four years after the book’s publication, David formed the Australian Association for Armed Neutrality with economist Philip Hind and me, historian Vern Hughes (now convenor of The Sensible Centre). The Association promoted armed neutrality for the next five years, engaging military organisations, nuclear disarmament activists, churches and defence scientists and manufacturers, but in 1993 it wound up, unable to shift the peace movement from its pacifism or the defence establishment from its dependence on US patronage.

Short-termism in Australian life, is, as Don Aitkin laments below, our national curse. There is no leadership in the country, in politics, business, culture, universities, churches or in defence and security. And yet, the ideas which underpin the policy of armed neutrality – an intelligent Australia that makes things and looks after itself without a crippling cultural cringe – resonated with many thoughtful people and still do.

As is the case in every field now in Australian life, the absence of national leadership is the killer. Our political duopoly crowds out ideas, intelligent public debate, communal self-help and institutional renewal. This is why The Sensible Centre has been established – to crack this duopoly and provide a platform for intellectual, cultural and political renewal.

China has provoked the political Right into an agitated state. Having spent the last twenty years grovelling to China in trade, investment, technology, tertiary education, and immigration, the Liberal National Coalition has now flicked the switch to war preparations, warning of imminent conflict. It appears to have noticed the galvanising impact that climate alarmism has had on Left-wing activism, and seemingly hopes that alarmism on China can have a similar benefit for the Right.

In truth, all forms of alarmism – on COVID, climate and China – are obstacles to both sensible policy and good mental health.

Don Aitkin’s recommendation of armed neutrality is timely in this moment of agitation. In two respects, though, we differ in matters of detail.

First, we do not need to produce every item of defence equipment we need for the independent defence of Australia. We can certainly do much better in manufacturing more at home, but we can also purchase carefully from abroad. Buying off-the-shelf German or Japanese submarines instead of re-fitted nuclear-powered subs from the French for three times the cost, was always madness. And buying nuclear-powered subs from the Americans for an undisclosed sum when delivery will not take place before 2050, is double madness.

Enough people said the French contract was madness at the time, but this wasn’t sufficient to prevent the political class from defaulting to its habitual vote-buying mentality and squandering billions solely to secure the Adelaide seat of Sturt.

And while we will need to spend more on defence – we favour an increase from 2 to 3.5 per cent, from $40bn to $70bn – we do not need to increase taxes to pay for this. Federal and state budgets are now laden with debt, and in the absence of major structural reform in the economy and in service delivery, debt levels will increase, not decrease, over the next ten years.