America may finally be turning against monopoly power 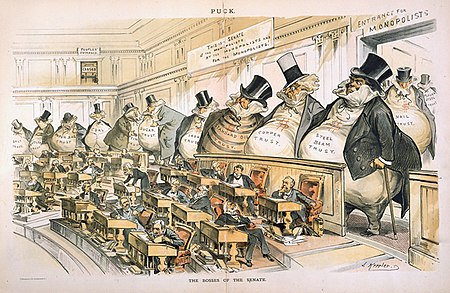 It is now more than a century since Teddy Roosevelt ushered in age of American anti-trust – eventually breaking up Standard Oil and other symptoms of what they called ‘robber baron capitalism’.

These events mainly took place during his presidency and that of his successor William Howard Taft – they brought over 130 cases against trusts and monopolies – yet the two key pieces of anti-trust legislation were passed outside their periods of office – the Sherman Act in 1890 and the Clayton Act of 1914.

Both are still on the statute book, including the Sherman Act’s invocation that:

“Every person who shall monopolise, or attempt to monopolise, or combine or conspire with any other person or persons, to monopolise any part of the trade or commerce among the several states, or with foreign nations, shall be deemed guilty of a felony ….”

It just goes to show how what really matters when it comes to enforcement of anti-monopoly is what the prevailing attitudes are – especially in Congress.

This is why the American anti-monopoly movement is so excited by the events there last week. Because unusually, the miserably divided House of Representatives managed to pass legislation on anti-trust. This is how Matt Stoller in the newsletter Big saw it:

“I’ve been focused on the problem of monopoly since Too Big to Fail banks crashed the economy during the financial crisis in 2008, so I have a pretty good sense of when there are political inflection points. And I will say with reasonable confidence that this week, the opponents of monopoly power took a big step forward. Against fierce opposition from dominant firms, the US House of Representatives voted for the Merger Filing Fee Modernisation Act, which is first time I can remember that we’ve won a floor vote to explicitly roll back monopoly power.”

The law doesn’t go terribly far. It simply increases the costs of mergers – also making sure that companies that want to merge to disclose subsidies from the Chinese government, and pay higher filing fees for big mergers, and it makes it easier to direct the extra revenue to the Antitrust Division and the Federal Trade Commission (FTC). The bill makes it easier for state anti-trust enforcers to bring cases by letting them have those cases heard in local courts.

But what is most important is that the lobbyists for the big tech monopolies were boasting about how they would stop the new law in its tracks – and they failed to. It shows that there is in fact a majority now in favour of anti-trust.

Why didn’t all the Republicans support it? Because they were caught between those who hate the big tech companies and those who can’t bear the idea of supporting British-born lawyer Lina Khan, Biden’s nominee to run the FTC and a protege of Barry Lynn of the Open Markets Institute .

Regular readers of these blogs (if there are any) will know that I used to run an anti-trust newsletter for a couple years, via Radix, but Matt is doing such a good job with his Big newsletter that I hardly needed to carry on.

Also you can wait for years to see any glimmer of interest in monopolies in this country.

Because we have lost the centre ground in the UK – and neither the right nor the left are very interested in monopoly power. Neither think that real free, open markets are important.

The left has no track record of interest in issues of scale and consolidation, because they believe free trade is effective.

The right has a simplistic view – similar to Robert Bork and Milton Friedman under Ronald Reagan in the USA – that there is no such thing as monopoly power.

Anti-trust is a liberal approach to economics – and unfortunately the Lib Dems in the UK have forgotten this too.

Because of this, I believe, we have no interest in the way corporations behave towards us. We are obsessed by the old touchstones – inflation or public spending – but we don’t normally see how these issues of scale are connected to both.

We appear to be like frogs in the frying pan, slowly cooking away, while the dwindling number of corporates in the UK laugh all the way to Wall Street and back,