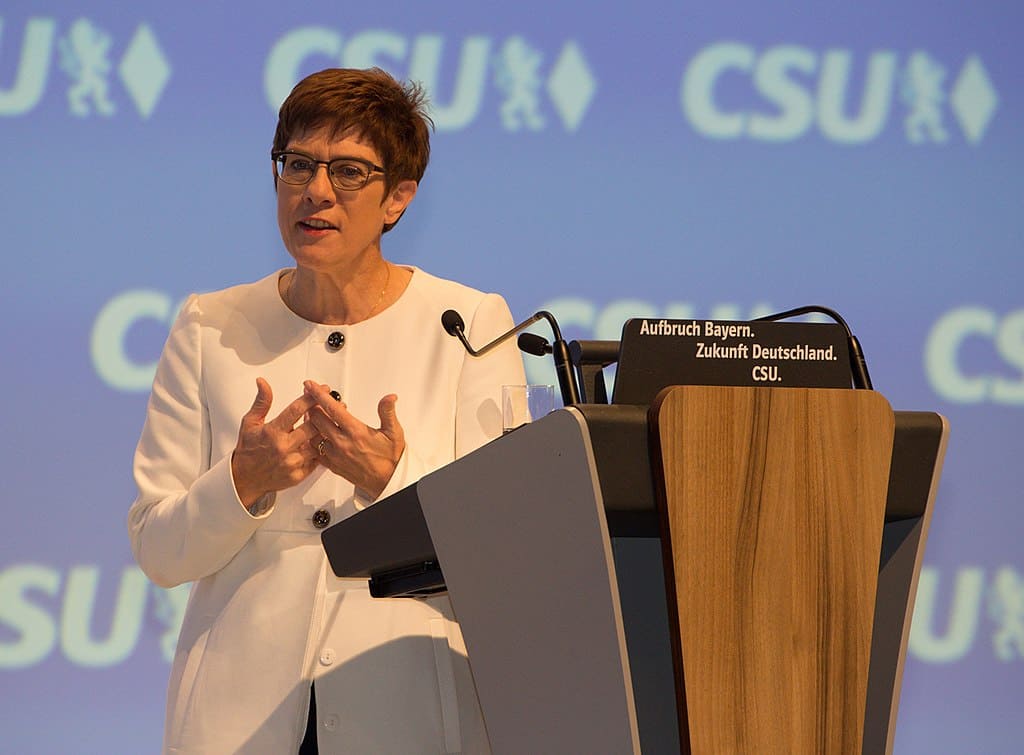 It was probably inevitable, though not in its rapidity and perhaps not quite for the reasons anyone expected. Once assumed to be the next CDU candidate for Chancellor, and hence almost certainly the next Chancellor, Annegret Kramp-Karrenbauer is standing down as chair of the CDU (and de facto most likely candidate for chancellorship in the 2021 Federal elections)[1]

She has been a beleaguered boss of a party with poor poll ratings and fighting off the surge of voting to the right, especially in the newer Federal states of Eastern Germany. She has struggled to unite the party, to form coalitions of interest, and has performed very poorly as Defence Secretary.

What sank her at the end was the machinations of her party in the state of Thüringen, where the local CDU boss voted for a Liberal FDP candidate as Minister President after the recent state poll, to keep out the reigning premier from Die Linke (the Socialist Left), knowing full well that the Liberal candidate would only win if also backed by the far-right AfD.

He did sneak an embarrassed win with the AfD votes, to the consternation of his own FDP and of the CDU. The impression was that the CDU in Thüringen had got into bed with the AfD, which is poison for the party at a Federal level and in Berlin. AKK rushed to Erfurt to admonish the local party boss, but the cat was out of the bag that she had lost control over her party. The rest became a sad inevitability.

With Karrenbauer leaving the drama soon, and a new chair to be appointed at a special session in late April, the CDU is at a pivotal moment which will shape Germany’s near-term future, and possibly that of the EU. Dynamic young Jens Spahn, health minister (currently in charge of the Coronavirus emergency measures) has chosen not to stand, but is surely a candidate of the future.

Instead he has thrown his hat into the ring to support the Minister-President of NRW (North Rhine Westfalia), the amiable, popular Armin Laschet. Opposing him is the more firebrand and right wing Friedrich Merz, who lost to Karrenbauer in the last election to lead the party.

Assuming that the new chair will lead the party into the election next year, and that the CDU will propose the new Chancellor in whatever coalition follows, the choice is a huge one. Laschet represents Merkel’s famous “Die Mitte”, the party boss in the CDU’s heartland of the Rhineland, where the SPD historically has also been well represented and where a centrist position is not unpopular.

But voting for Laschet leaves the door open to a strong movement from the far right to draw votes away from the CDU. A vote for Merz makes that less likely as voters considering the AfD may decide to stay with or switch to the CDU if a more right-wing “strongman” like Merz will be the next Chancellor.

So the AfD is the bogeyman. But in many ways, while spooking the CDU, especially since the Thüringen debacle, the more interesting question is which CDU leader could cut a deal with either the Social Democrat SPD (which is surely unlikely given the terminal drift of that party) or the ebullient Greens, riding high in second place in the polls.

With their outstanding duo of Robert Habeck and Annalena Baerbock there is no reason to doubt the Greens will do very well in September 2021 and will be knocking on the door of other parties to form a coalition. Laschet may be eyeing the first Black-Green coalition at a federal level, which would certainly break all existing traditions federally, if not locally (Baden-Württemberg has a well functioning Black-Green coalition, led by a Green Minister-President). It is much less likely that a coalition could be struck with Merz whose manifesto would naturally be far less reconcilable with Green politics

Unlikely but not impossible. Politics is the art of the possible. The measure of a successful candidature by Merz may not be his ability to keep the Fascists at bay as much as his ability to reach out to parties further left on the spectrum to create a functioning coalition for 2021-25.

Which leaves one other intriguing question. With Johnson out of the picture, Merkel stepping down next year and Trump increasingly absent from European affairs, Macron has become the natural leader not just of Europe but “the free West”.

This leads to an inevitable imbalance in European affairs which the Germans will be keen to – subtly – address. Laschet would do that his way, Merz in a very different way. Who wins that battle may set the tone for Franco-German relations, and hence the direction of Europe at least to the mid-2020s.

[1] for the delightful complexities of the German political landscape in 2020, please see https://radixuk.org/opinion/six-sided-chess-and-the-radical-centre-in-germany