A tale of three cities 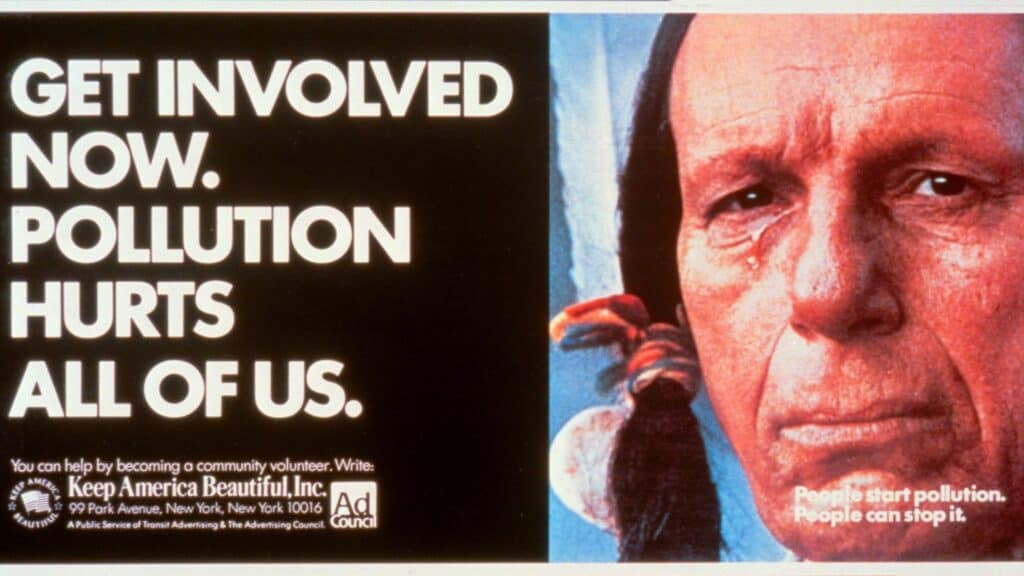 “All these protests held industry—not consumers—responsible for the proliferation of disposable items that depleted natural resources and created a solid waste crisis. Enter the Crying Indian, a new public relations effort that incorporated ecological values but deflected attention from beverage and packaging industry practices.” – The “Crying Indian” Ad That Fooled the Environmental Movement

It all began in 1971, with a television advertisement.

Sometimes a good tale requires a startling juxtaposition—, or a set of them. Take for example the opening lines in Dickens’ A Tale of Two Cities:

Dickens perfectly described 1970s America.  At the time the Crying Indian ad first appeared (1971), I lived in a California suburb. I was roughly six years old.  And television had become what radio had been, a sort of hearth which connected us with what we assumed to be the world.  It was our primary window on that world, and that it was such was rarely questioned.

Walter Cronkite told us the news on TV, but I don’t much remember him.  I remember Gilligan’s Island, Bugs Bunny and The Road Runner… and the Crying Indian. I remember iceberg lettuce, Heinz ketchup and French’s Classic Yellow Mustard. I even remember milk delivered to my doorstep in glass bottles, as happened in Mayberry.

I remember lime Jell-O, Tang, Kool-Aid and endless hours “swimming” at the all-white membership swimming pool.  I remember the boy with six toes on each foot who I met while “swimming” there.  I remember summer vacation was an eternity.

I remember twenty million tiny frogs appearing at the creek which ran through what once had been a farm which my buddy and I would always walk to. I remember them as so thick on the ground that it’s now unclear how we managed to walk through them without stepping upon them.

It was very many years later that I learned that the Crying Indian, Iron Eyes Cody, was really Italian, and that the public service advertisement was made by a consortium of packaging industry corporations called Keep America Beautiful (KAB).

KAB practiced a sly form of propaganda. Since the corporations behind the campaign never publicized their involvement, audiences assumed that KAB was a disinterested party. The Crying Indian provided the guilt-inducing tear KAB needed to propagandize without seeming propagandistic and countered the claims of a political movement without seeming political. At the moment the tear appears, the narrator, in a baritone voice, intones: “People start pollution. People can stop it.” By making individual viewers feel guilty and responsible for the polluted environment, the ad deflected the question of responsibility away from corporations and placed it entirely in the realm of individual action, concealing the role of industry in polluting the landscape. – The “Crying Indian” Ad…

The ‘cities’ in my title aren’t really cities, per se. They are more like stories–narratives. They are frames, theories, lenses, perspectives. Tales, if you like. My tale isn’t a variant on Dickens’.  I lured you into my cities and now I offer a tale of three kinds. Do you feel cheated? Does it bother you that I’m not really an Indian, that I lured you in on false pretenses?

A tale told from a future near you

“If you want to transform the whole world, begin with a neighborhood.” Redd N. Blackmann

Structville
In our first city, Structville, all of the inhabitants believe that corporations use the notion of personal responsibility toward ecological and environmental problems as subterfuge–, one which displaces and deflects blame and responsibility from corporations onto ordinary, everyday people. Inhabitants of this city believe that only that which they call ‘structural changes’ are meaningful and relevant to addressing our world’s ecological and environmental problems.

By ‘structural changes’ they mean public policies which constrain corporate behavior. Basically, residents of Structville believe only governments, not individual people (or people acting together in communities but outside of government), can possibly transform our world in the direction of environmental and ecological health.

Residents of Bootstrap City (who pull themselves up by their very own bootstraps) have exactly the opposite view to The Structville orientation.  Bootstrapians believe Structvillians are the real villains, in that they deny all personal responsibility for their own personal ecologically destructive habits, deflecting this responsibility onto corporations and governments.

As Bootstrapians see it, Structvillians – when they aren’t driving their oversized SUVs to oil and gas pipeline blockades and anti-coal rallies, or flying off to the latest United Nations Climate Change Conference – are living lives of extreme fossil and materials luxury and sourcing their food from halfway around the world.

Of these three cities, only Vennderville currently has its own flag (shown above). The other cities abandoned their flags after the Great War.

Named after John Venn, the city prides itself in having broken away from the Great Eco-wars between Structville and Bootstrap City (April 22, 2023 to April 22, 2024).

Residents of Vennderville (East and West) agree with Structvillians that corporations have often used the sort of subterfuge which is at the heart of their perspective, but don’t think the matter is so simple as that. And they agree with the Bootstrapians in their pointing out the importance of personal responsibility. As all Venndervillians see it, what is required of us is both personal responsibility for our own personal choices and political engagement.

West Vennderville is the warmest, kindest, sweetest bunch of folks! They broke away from ‘the state’ (as they call it), but it’s not like they’re a violent mob throwing bombs and assassinating East Venndervillians.  For West Vendervillians, politics occurs not within ‘the state’ but within the federated ‘villages’ (neighborhoods).

The Westies still fly the flag of United Vennderville, but with a sense of hilarity and irony that lightens and warms their hearts. Stateless though they may be, West Venndervillians are deeply engaged in world politics, especially including eco-politics.

From the perspective of West Venndervillians, “the state” co-evolved with corporate capitalism in such a way that what appears to be two things has long been really just one thing: “the corporate state.”  It makes no sense to ask “the state” to side against corporate interests, from their point of view.

“Asking the state to reign in corporations is like asking a fox to guard a henhouse,” said Redd N. Blackmann of West Venndderville in my interview with him. “If you want to transform the whole world,” he said, “begin with a neighborhood.”

This post first appeared in the R Word newsletter…