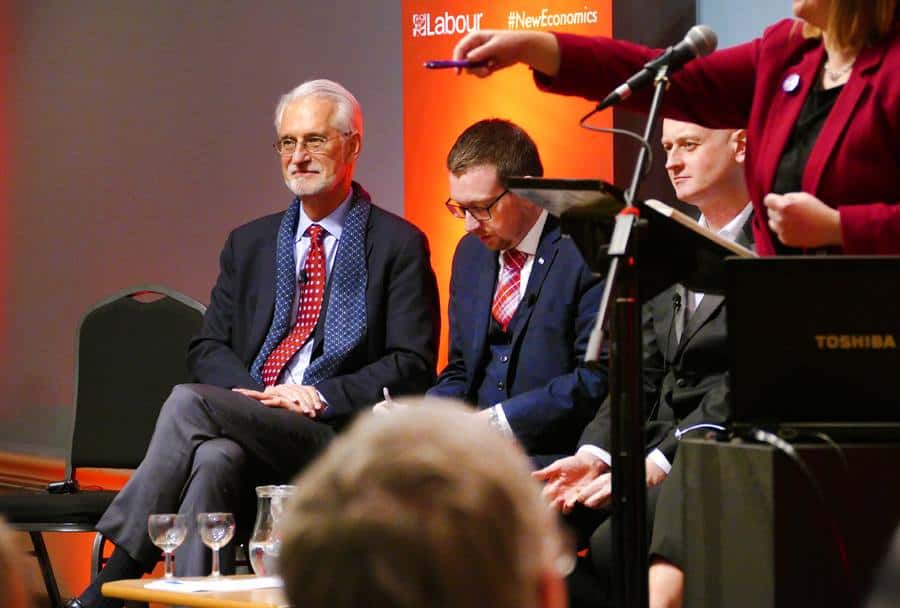 Sarah works in our local Steyning bookshop – one of those magical places that have had the kind of effect on my small town that James Stewart’s savings & loan had on Bedford Falls in It’s a Wonderful Life.

She has noticed a number of orders for a new book by the leader of Preston City Council, Matthew Brown and Rhian Jomes – called Paint Your Town Red: How Preston Took Back Control and Your Town Can Too.

It so happens that I know something about the Preston approach. In fact, I interviewed Matthew for my own book written with the help of the Barrow Cadbury Trust, called Prosperity Parade.

Despite the clear implication of the title, the Preston model is not actually socialist. It was in fact a source of some opposition for Brown from his own side (Labour) immediately after the banking crash.

Nor is it especially new. It may even go back as far as Peter Shore, Environment Secretary in the Callaghan government, who first talked about “bending the main programmes”. That and the inspiration of the Evergreen project in Cleveland, Ohio.

Cleveland was the American city worst hit by the sub-prime mortgage crisis.  There are two major economic players still active there, and they are both in the public sector: the university and the hospital.  To put the hospital to better economic use, the Evergreen project has borrowed an idea from one of the great success stories of co-operative business, in Mondragon in Spain.

Mondragon dates back to just after the Second World War, when the local Catholic priest founded the first worker’s co-op to employ local people and meet local needs.

Both are new co-operatives that employ local people and redirect the spending power of the local hospital to launch them and underpin them. It requires money but it is money that is already being spent – it isn’t about raising more; it is about altering where it flows to.

Conventional thinking suggests that money will trickle down from the successful to eventually employ the unsuccessful – especially if they leave their communities ‘on their bikes’ to find work.  We know of course that trickle down doesn’t work, and have known for decades, just as we know that the most disadvantaged people don’t in practice leave. But what do we do instead?

Cleveland’s Evergreen approach is one approach, and it has spawned a range of copycat ventures in the USA. Of course it makes a difference to the hospital too if more of their catchment area are in paid employment. It means they are likely to be healthier, for one thing. There may be downsides, of course: contracts may be more expensive – but the research hasn’t been done to tell us whether the extra costs outweigh the savings.

Brown is also borrowing some of the ideas developed at the New Economics Foundation under the title ‘plugging the leaks’, and developed by CLES in Preston and Birmingham.

Preston has become one of the very few places in the UK which is trying to shape some new economic levers systematically – not just with local banks or any of the other solutions, but by using all these new tools together. That is difficult and ambitious but inevitable – given the pressure local authorities are now under, when they can’t any more wring their hands and hope someone will bail them out. They need to get under the bonnet and see where the oil is flowing, to use a motoring analogy, and whether it might flow in ways that benefits their population a little more.

The question is now how can we take a step forward and change the way we are doing things more fundamentally.

These ideas are controversial. The Treasury, in particular, regards them as a kind of protectionism – a sort of local Berlin Wall that keeps out quality and innovation. Of course, it could be like that. You can see why there is an official fear of second-rate local businesses driving out first-rate ones because they are local. That would be a recipe for higher costs.

But equally, it makes no sense to remain ignorant of where the money is going, and to use the people whose lives you are charged with supporting to deliver contracts if they carry them out at least as well as outside contractors. There is an unresolved argument here also about economies of scale and how soon they are overtaken by diseconomies of scale.

Either way, it also makes no sense to use none of the wealth that is being kept in trust for the city – and remaining hopelessly passive, hopefully waiting for some kind of central government bail-out.

Rebuilding the fine mesh of a local economy, using public sector procurement, remains a controversial business. But it does have a long history: back for millennia, cities have developed by replacing imports. The danger if we think this is ‘painting the town red’ is that only the Left will try it.