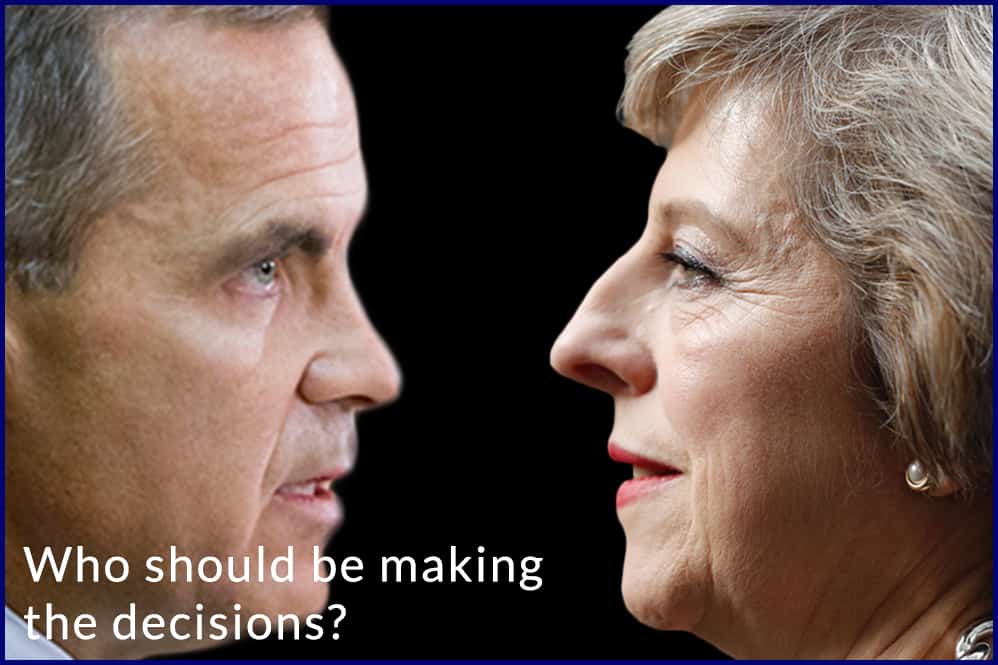 “The objectives are what are set by the politicians. The policies are done by technocrats. We are not going to take instruction on our policies from the political side.”

This reported statement by Mark Carney, Governor of the Bank of England, came in response to the Prime Minister’s speech at Conservative Party conference where she said:

“While monetary policy – with super-low interest rates and quantitative easing – provided the necessary emergency medicine after the financial crash, we have to acknowledge there have been some bad side effects…A change has got to come and we are going to deliver it”

“These testy comments from the Governor are unwarranted. He and other MPC members have admitted monetary policy is redistributive so of course his work is fundamentally political.”

Bernard Jenkin, the head of the Public Administration Select Committee, told the Telegraph:

“The pursuit of quantitative easing is a matter for the government, which is why Mr Carney wrote to the Chancellor to ask his permission to pursue that policy. Monetary policy is a shared responsibility with the government and the idea that the Bank of England is completely beyond democratic accountability is a nonsense. Why is the bank governor picking a fight with the Prime Minister? What’s his real agenda?” In our report, we suggest that “The boundaries between political decision-making and central bank independence are clearly blurred. Such blurred boundaries have consequences both for proper democratic accountability and for the bank’s own credibility.”

Mr Carney’s statement that technocrats should just be allowed to get on with it irrespective of the social and political consequences should clearly be unacceptable in a functioning democracy. Yet the proper form of interaction between a central bank and the elected government of the day is a difficult one to define. A fiercely independent central bank is dangerous. We relate in our report how, both in 1966 and again in 1982, a fiercely independent Bundesbank twice deliberately brought down the elected German government. This is clearly not the sort of arrangement we would want in our democracy. Likewise, there is an important role for a technocratic body to take a position based on its own perspective and the opinions of its members. How the two should interact is a matter for discussion.

Mr Carney and the Bank’s Monetary Policy Committee have for too long had the unenviable task of trying to support the British economy with their limited monetary policy tools and with no help from the previous administration. In fact, a fiscal policy focused on austerity has made their job much more difficult. However, their choice of method has had significant distributional consequences and, as we describe in our report, they could have chosen alternative approaches that would have been far less regressive.

Our report is titled “Quantitative Easing: The Debate That Never Happened.” We are delighted that the debate has finally started. Mr Carney is wrong to try to shut it off. The issues are difficult and the optimal approaches are not obvious. The Bank, the Government and others should, therefore, be encouraging and engaging in a wide-ranging public debate. That is how properly functioning democracies should work.

As Professor John Kay puts it in his Foreword to our report: “No democracy can accept that policy decisions that have large effects on the distribution of income and wealth, on financial stability and economic growth, are off-limits.”