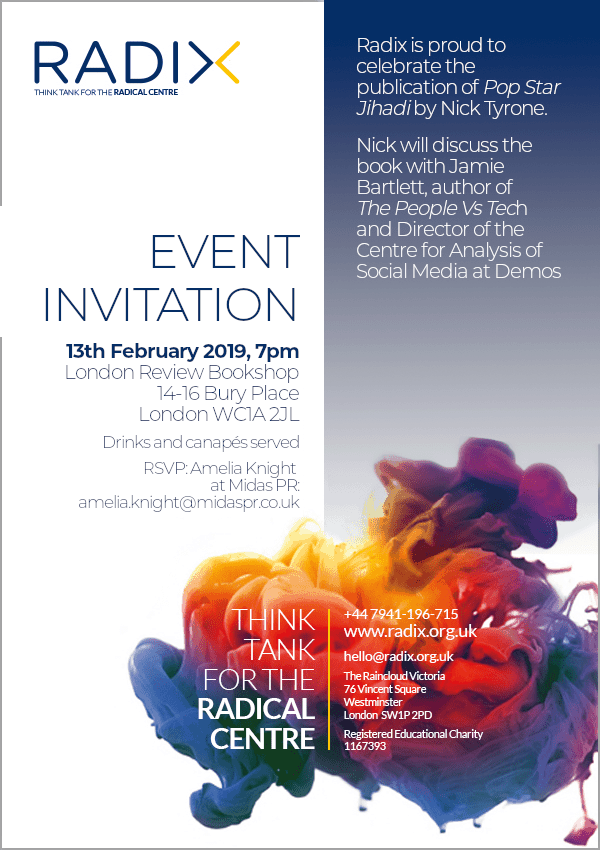 Radix will become the first think tank to release a novel, Pop Star Jihadi by Nick Tyrone, when it is published in e-book format on Jan 29th and paperback on Feb 7th.

Summer, 2018. Global pop sensation, Noah Hastings, takes to the stage to perform a concert in New York City. Several songs in, Noah detonates a bomb that is strapped to his chest, killing himself and ninety-one of his fans.

Speculation about the pop star’s motivation for the crime runs riot until the authorities conclude, given circumstantial evidence, that fundamentalist Islamism was the prime inspiration for the suicide/murder. However, when this is discovered not to be the case, and a whole other ideology was supposedly at work, what happens then? Nina Hargreaves, an investigative journalist, travels around America searching for the real story. She gets close to the truth – but also risks losing everything she has in the process.

Pop Star Jihadi is an exploration of how, in a world where media is fragmented and debate so polarized, it becomes impossible to know what’s real any more, even when the truth is revealed. With the decline of investigative journalism and the explosion of the blogosphere, echo chambers and alternative facts, Nick Tyrone explores the corrosive effect of fake news on contemporary society.

To celebrate the novel’s release, Radix are having an event at the London Review Bookshop on Wednesday, February 13th at 7 PM, one in which Nick will be interviewed by Jamie Bartlett, author of The People vs Tech. For a limited time, Radix is offering rsvp places to the event, so if you’d like to attend, please send your rsvp email to [email protected]